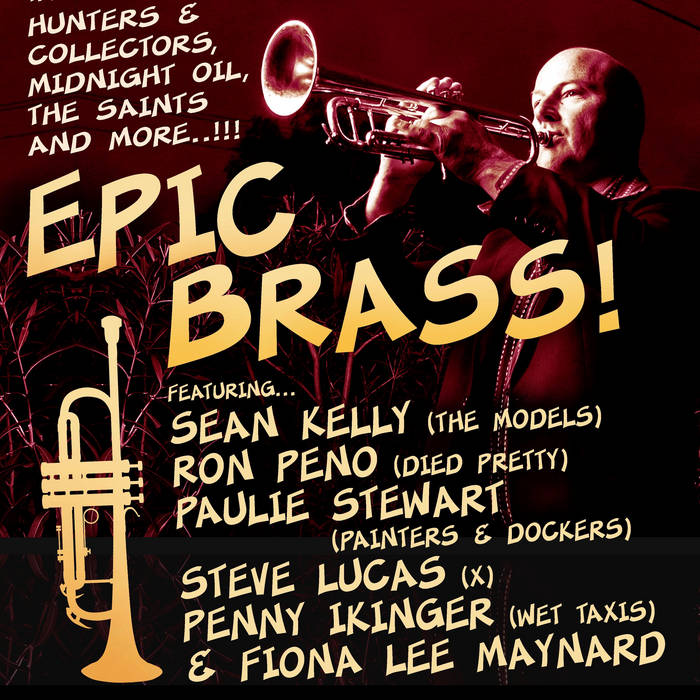 The stars aligned on Saturday July 9th 2016 at St. Kilda's marvelous new venue, Memo. Jack Howard's Epic Brass was truly epic. Performing the "great horn hits and hidden gems of H & C, Midnight Oil, The Saints, Laughing Clowns and more", Jack and his band and his amazing line-up of guests played a truly memorable show. The dance floor was packed and the band was awesome. As one punter, Julietta Jameson said - "Often when you're expecting something to be great, it doesn't meet expectations. Jack Howard's Epic Brass show high-jumped over expectations, then did a triple somersault with a perfect landing. Still buzzing the day after!" Enjoy..

And some more detailed program notes for you -

The horn section in rock music has usually worked on the periphery of our recognition. Singers and guitarists feature in the expensive videos and press releases, while the horn players lurk in the background, perhaps in silhouette, often looking slightly awkward or pulling goofy poses. Session players, graduates of the local jazz music course, classical players hankering for the spotlight, they often don’t fit into the glamorous (sic) world of rock; and the horn section is also often a luxury that bands can only afford for recordings and for the big CD launch. Their musical impact, however, can help to transform a good average song into an epic.

The undisputed fact is that the best of these horn-led songs have been absolute corkers - Know Your Product, Power And The Passion, Say Goodbye.

The Australian music scene in the 1980s was incredibly vibrant and bands could build a strong following touring the country’s inner-city clubs and suburban beer barns. Tough but rewarding work if you had persistence, decent tunes and a good road crew.

Hunters and Collectors was probably the most well-known band to feature a regular horn section (which became very integrated into the band with the members playing keyboards, singing backing vocals and contributing as songwriters); but there have been so many fine bands and songs featuring horns that never quite made it onto the mainstream commercial airwaves and that have been worthy of wider attention.

The bands that feature in this show are primarily east coast bands of the 80s and 90s and they are rock bands, spawned in the the pubs and clubs of Sydney, Melbourne and Brisbane. There are plenty of brilliant bands and songs out there that are more in the soul/funk/ska variety or that feature great sax players; but the focus of this show is more on the hard-edged rock horn section.

Hunters and Collectors featured The Horns Of Contempt - Jack Howard on trumpet, Jeremy Smith on French horn and Michael Waters on trombone; along with Nigel Crocker on trombone and Andy Lynn and Chris Malherbe on trumpets in the early years. They began with the band in 1981 and quickly became an integral part of the H & C sound.

Midnight Oil’s horn sections on record often featured overseas players but in Australia, Glad Reed was their mainstay over the years. Glad featured on Beds Are Burning and also played in Louis Tillett’s Wet Taxis and The Laughing Clowns. The Taxis’ section featured Glad, Kathy Weymss on trumpet and Di Spence on sax. Kathy also featured prominently in The Jackson Code. A brilliant lineage of Sydney horn players.

Ed Kuepper’s The Laughing Clowns had a fluid line-up but prominently featured the legendary Louise Elliott on tenor sax and Peter Doyle on trumpet; and later on, Glad on trombone and Di Spence on alto sax.

Painters and Dockers’ rambunctious live shows featured Dave Pace (and Paulie Stewart) on trumpet and Mick Morris on sax. Jack and Charlie Todd played on their first record, Love Planet, and often risked life and limb performing live with them. The Dockers’ horns were affectionately known as The Brassholes.

Stephen Ewart played trombone on The Birthday Party’s Nick The Stripper (alongside Phillip Jackson on trumpet and Mick Hauser on sax from Equal Local) and toured with bands like Paul Kelly and The Dots and Jo Jo Zep.

The Saints’ famous horn lines were recorded in London. Know Your Product was arranged by Graham Preskett, a well-known U.K. composer and performer. The great Swing For The Crime features Martin Bruce and Martin Drover on trumpets, Paul Nieman on trombone and Roger Cawkwell on saxes and arrangements.

The Horns of Contempt, or percentages there-of, have also featured on some great records outside H & C - significantly with The Models, The Living End and X. Jack, Jeremy and Michael played regularly with X and featured on four tracks on their classic album, At Home With You.

They also have a great Midnight Oil connection with Jeremy featuring on Dead Heart and the section performing with the band on their 1990 world tour when H & C supported the Oils. They’ve also recorded with Rob Hirst’s band, The Ghostwriters; and Jack is a member of The Break alongside Rob, Jim and Martin from the Oils and Brian Ritchie from The Violent Femmes.

The Epic Brass Band is a mighty outfit in itself - with Ash Davies on drums, Steve Hadley (Tex Perkins) on bass, Nicky Del Rey (Intoxica and Jack’s band, the Long Lost Brothers) on guitar, Jason Kain (Jackson Code, Wet Taxis) on guitar; plus the Epic Horns, Charlie Todd (The Wreckery) on saxes, Geoff Lierse (MSO) on French horn and the Horns Of Leroy’s Travis Woods (trumpet) and James Macauley (trombone).

Jack Howard plays trumpet with Hunters and Collectors and for the last fifteen years, he's been releasing his own highly- regarded CDs. Along the way, he's also played with The Living End, The Violent Femmes, Rodriguez, The Break, You Am I, Little Red, Pete Murray and a host of others. In 2017, Jack toured the world with Midnight Oil as their trumpeter/multi-instrumentalist. ... more

Bandcamp Daily  your guide to the world of Bandcamp